This was originally a three month trial. However, at the end of the three months it had recovered from a bad run and was making large strides, so rather than end it there on a neutral rating, we decided to extend it for a further month to see if the upwards trend continued. Unfortunately, February’s results took it straight back down again, nearly wiping out all profits before subs; and so, making a loss after subs are taken into account.

However, I’m not going to fail this service. Since launch on June 2nd last year, it has made over £6,000 profit (£10 varying points stakes) to best odds available (it has usually been possible to achieve advised odds, and with the less obscure matches the equivalent after commission on Betfair). It would be a disservice to you to write this off as a failure on the basis of the four trial months results. Indeed, what this trial does do is give an idea of what to expect in terms of ebbs and flows. The lowest level the trial achieved was around -£400 and the highest level around +£500. So you have to be a certain type of bettor for this to be of interest. Those who have been with it since launch will obviously be very happy. 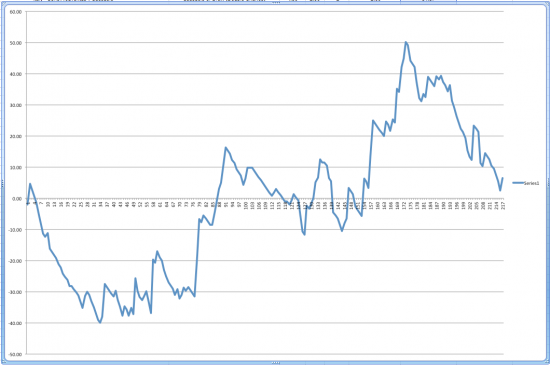 The service is hosted by Betting Gods, the agency which I think is the best for transparency and fairness. You won’t find any inflated results here where all selections are 10 points! Last month I did mount a diatribe against a service which was guilty of such a ruse (many of these services take their economy with the truth from the Donald Trump School of Reality). It’s important to note that there are varying stakes in this service according to the strength of perceived value (average stake over the trial was 2 points). The stakes vary between 1 and 10 points, so if you bet £10 per point, your highest stake would be £100. Actually during the trial there were only three selections advised at maximum stakes, one of which won and two lost. Next highest was 8 point bets which occurred four times, with three winners and one Asian Handicap with stake returned. The vast majority of bets are either one or two points.

I assume the author of this service arrives at the bets through their own software and interpretation. There are many soccer services out there which go after the obvious bets (with correspondingly short odds), some successful (but painfully gradual), some less so. This service is refreshingly different. We all know that there are times when teams like Wigan beat the Manchester Citys of the leagues, but few go in search of the situations where these ‘upsets’ may occur. For Chloe’s Football Focus, these aren’t upsets so much as opportunities. Such as identifying Espanyol to beat Barcelona in the Spanish Cup, or Partick Thistle to beat Celtic on an Asian Handicap of +1.5.

So, I am giving this service a NEUTRAL rating. I don’t feel I can recommend it on the basis of the trial because after subscription fees it lost. But the potential is clear, and the results from launch are impressive. I wish the service well.