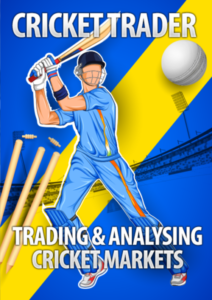 A few years ago I went on a betting exchange trading seminar at Charlton FC run by Aussie Tony “The Badger” Hargraves of http://thesportstrader.com. What struck me about this event was, first of all, it seemed absurdly cheap, and secondly, that he was willing to prove himself by trading live. The focus at that seminar was mostly on pre-off horse racing and tennis, also touching on soccer. And after the event, he took us to the pub and bought everyone a drink!

Chatting in the pub, Tony was able to offer me advice after I had been seriously ripped off by another operator and came across as an all round great guy who hates rip-off artists and can’t bear the idea of gambling. I know a fair few expert traders and, to me, Tony is up there with Peter Webb as one of the best in the business.

Tony has now released his latest book, which examines trading in cricket. Since the dawn of T20 and the IPL, betting on cricket has grown exponentially and offers new opportunities for those willing to conduct the research. Tony has expert knowledge of the game – which in recent times has seen big changes – as a player himself for 32 years, so he is in a great position to identify the trading opportunities that the various formats of the game facilitate.

I have been following cricket for even longer than Tony – it’s the true beautiful game – and have come down the line from my dad and grandpa as a Kentish Man, and am overjoyed that ONE of my two sons has also got the bug. At least the other son plays, even if he doesn’t watch! It is now even taking off in Germany, where refugees from Afghanistan and Pakistan have trebled the number of clubs in recent times. In India, it’s the biggest national obsession, just like rugby is in New Zealand and beer is in England.

However, for those who haven’t followed the game, some of the information in the manual is going to be a bit perplexing with crumbling pitches, reverse swing, green tops and bunsen burners. But Tony is there to guide us through what these things mean, where to track down the information, and how to potentially profit from it. All trading, no matter what the sport, is influenced by the factors that move the markets. That may be self-evident but for those who take their trading seriously, the better understanding you have of these factors, the better equipped you are to profit from it. Obvious though that is, the better informed make their profits from the lesser informed.

There are three formats of international cricket nowadays, with Test Matches (two innings per side played over five days), One Day Internationals (ODIs) and Twenty20 (T20) which are comprosed of 20 overs per side. There are other formats in the domestic games. The easiest games for betting are Test Matches, as the match has a lot longer for your analysis and expectations to unfold. You do not often see the frantic and volatile price swings in a Test and so we can take larger positions and stay in them for longer. And the pitch changes significantly over five days, whereas it does not in a one day game.

Tony analyses all the factors which affect a game and arms himself with as much preparation as is available to enter the fray. He will always know what to expect from the country the match is being played in, the teams that are playing each other, the pitch report, the head to head stats, the weather forecast, which team won the toss, etc etc. He will then proceed to identify the best betting approaches, including his entry and exit points.

There is a link to a great exclusive sample video as Tony trades live (it’s OK, it’s highlighted, you don’t have to watch the game in actual time!!) and shows there is no need to panic when a star batsman gets out early for no runs and the price goes against him, as lo and behold, back it comes and nails him a profit. He has a very calm voice! 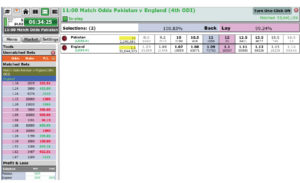 You may think that trading Test matches requires many hours, if not days – and it certainly can. However, it is also possible to profit in much smaller chunks of the game, like an hour if batting is going well or less than that if the bowlers are on top. The final Test Match at Lord’s where England played Sri Lanka last week is an example of that. It was day five (final day) and I looked at the weather forecast, and it was rain, rain and more rain. Sri Lanka, in their second innings, had all their wickets intact and had already lost the series 2-0. I looked at the price on Betfair and couldn’t believe the draw was priced at 1.25. I immediately took a position on that and really, that should have been that. However, some time after lunch the rain did stop, Jimmy Anderson came on and took a wicket and it looked like, with what the ball was doing, England would only need 20 or so overs to knock them over. I panicked, and got out. And then back the rain came, game over! 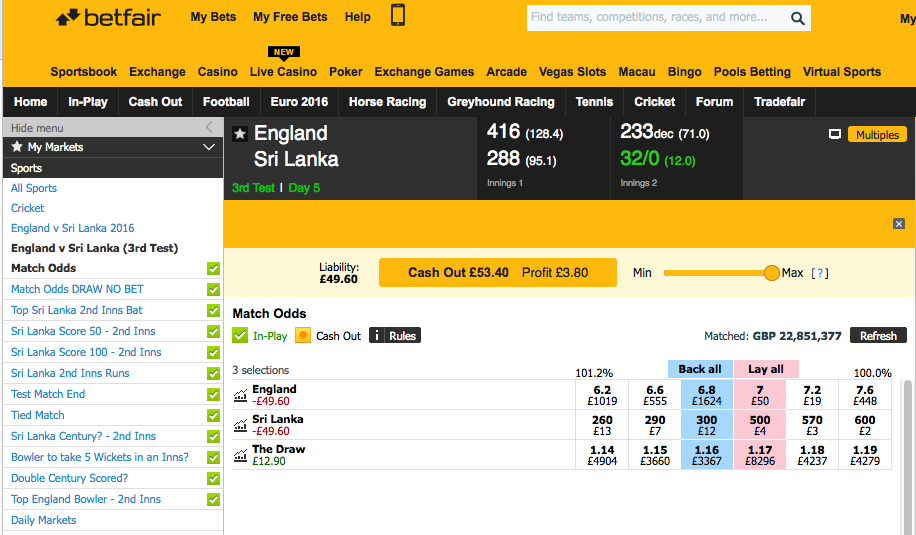 The manual sets a checklist for each format of the game and directs you to the information sources at the end. It also explains how to avoid losing a great green position due to match abandonment for weather, where, in one day games, all match bets are void.

If there is an omission in the manual, I think it is lack of discussion on the Duckworth Lewis Method, whereby a match curtailed by weather has to undergo the complicated mathematical algorithms to adjust the target of the side batting second, adjusted after every over. This can make a significant difference to the outcome, and therefore the betting, and I would imagine offers further angles for trading.

I don’t think it would be a good idea to come at this with no knowledge of cricket at all. There are so many factors involved that a rookie will always be eaten up by an expert such as Tony. You would also need to devote time to this as even the shortest game of cricket is around three hours, though you won’t, of course need the whole three hours because trading involves profiting from the fluctuations of prices during the game. And I’m guessing Tony isn’t only trading cricket when he trades it. I’m sure he has his eyes on other sports concurrently in play.

As always with Tony, this is a great manual which will equip you well in the planning and execution of your trades, and I heartily recommend it as another potent weapon in your trading arsenal.

You can get Cricket Trader here: