Two weeks ago the team behind Grey Horse Bot released MR2 bot, which was a bot dedicated to running the MR2 system.

I’ve been running mine on my virtual server for the last fortnight and thought it time for an update.

Now on the first or second day of running this, I had to restart my VPS to install some regular Windows updates and unfortunately, unlike GHB, the MR2 bot doesn’t remember the session balance. This is a bit annoying as I run several bots using this particular Betfair account so it would be a nightmare to go through all the bets to work out the value for those two days. Basically I think the bot lost somewhere between 7-9 points (and on my £10 stakes that’s around £70-£90).

I’m running the backing bot and the place bot.

Over the two weeks the bot went through some terrific losing runs, as is to be expected with backing at these sort of odds, and I noticed at one point my backing bot was down to -£295, so around 30 points down although I suspect it my have gone further into the red a some point perhaps as much as 40 points down judging by some comments I’ve read.

The place bot has mostly been in profit during this time.

Yesterday I downloaded the new Lay bot which comes as part of the package and started running that at £10 level liabilities. 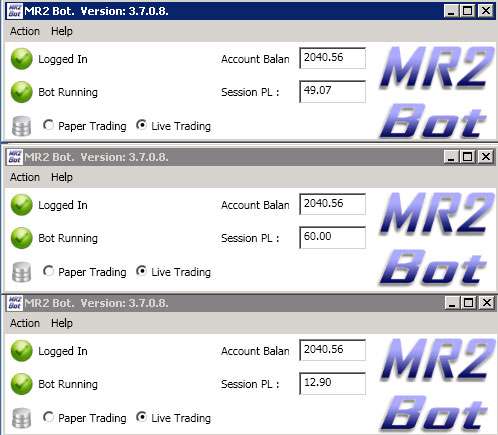 As you can see the back bot has got back to winning ways, recovered the loss (since restarting my bot) and made a small profit, the place bot seems to be doing well, and the lay bot, although very early days, seems to be going in the right direction.

One thing to be very aware of, if you are thinking of subscribing to this bot, is that the backing bot WILL have losing runs, sometimes lasting for weeks. This happened to me twice during my initial trial of the MR2 system, and it will happen again. I’d recommend using a betting bank of at least 200 points (a real bank, not one where you quit if you lose 100 points!), and if you can, leave it running on a VPS, as then you don’t have the emotional highs and lows of looking at it’s performance on a daily basis.

You can get MR2 bot here: