I’ve not spoken about PIE for nearly three months now because, well, it’s just so predictable. That’s something you don’t hear a lot when talking about trading products.

It’s actually the spread betting part I want to talk to you about today.

I trade PIE through a broker called Interactive Brokers, and with a fairly significant trading fund too (I sold one of my investment properties and put the funds into PIE). However, at the end of last year it became possible to trade a ‘similar’ method to PIE on a spread betting platform. I say ‘similar’ because it’s not possible to trade it in exactly the same way simply because of the way spread bet trading works. Because of this, I haven’t, and won’t, invest large sums to trade with; instead I opted for a trading fund of just £7000. I do appreciate this may still sound like a lot to some readers, but when you consider there are PIE traders using funds in excess of £100,000 (and one I know that is using over half a million!) then it can be considered a relatively small amount.

The spread betting platform is extremely simple to use and, as with the main PIE version, this takes literally a few minutes a month to operate. So you log in once a month, place a trade and log out. That’s pretty much it.

I started spread betting this method last November and these are my results thus far:

That’s 27.72% return in 8 months and that’s with not trading for two full months too!

But that’s not all, my August/September trade, which will close on 19th of this month has produced a bumper profit due the rapid downturn on the DAX a few weeks ago, which gave me an opportunity to jump in and really make a nice extra trade. So whilst other people doing traditional trading were getting stopped out, or bailing out of positions for heavy losses, I was cleaning up: 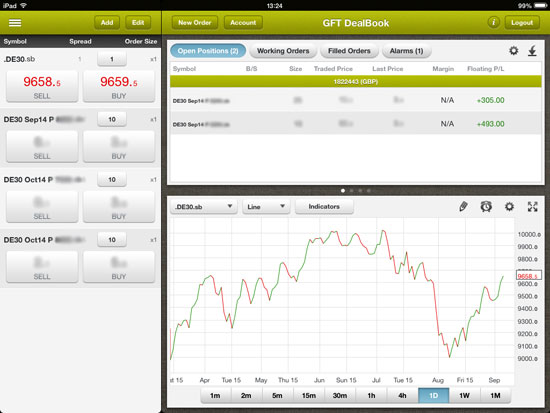 I’m currently showing a profit of £798 for the month, but I fully expect this trade to close for a total profit of over £900!

The screenshot above is taken from my iPad. One nice thing about using the GFT platform is that it’s simple, easy to navigate, and can be operated from phones and tablets really easily.

PIE is, without a doubt, the most stable and consistent income stream I have. A few people that have been on the PIE training course have since converted their pensions into SIPP’s so that they can not only have full control of their own funds, but they are getting far, far higher returns than any pension companies have been able to produce, and without any drawdown’s either.

There is one training course left, next Thursday, in Sheffield and only three places available. When I went, I realised it was a day that changed my life. Over the last two and a half years, it’s changed the lives of many others too.

Have a look here: