Are you cut out to be a successful bettor? Test your staying power with this winning service.

This horse racing backing service is delivered by racing professional Gary Hemming, who has been in the game for over 25 years. He uses his contacts and his own judgement to arrive at his daily selections, which are managed by The Winning Information Network (WIN), part of the Betfan stable. Prior to launching “Pace Ace” he was proofing to a live audience on the Tipster Planet platform under the name of “Gazza’s Horse Tips”, making over 400 points profit in less than 4 months. Gary concentrates on value selections at odds usually above 5.0, and almost all his advices are each way. There is also very often an advised multiple bet, usually a patent, to try and hit that bigger windfall. The selections arrive by email at varying times before the start of the day’s racing, and are also available to members from the website.

When I began monitoring the trial three months ago, the service was called “Place Ace” (for obvious reasons, being each way betting), and this suddenly changed mid-stream. Added to the daily emails were also brief reasoning notes with each selection, which were not previously provided. I was told that this was because the take-up of the service had been lower than expected and it was felt that aiming for placed horses might be putting people off.

The nominal bank advised to administer this service is 200 points, and as we will see, this was adequate to cover a sharp downturn. The staking is high – it is not unusual to invest 30 points in a day on 8 selections. The lowest stake is 1 point each way, and this is a bit of a bugbear with me. I like to see basic staking at 1 point, so a half point each way would be my own point of reference, and I would normally calculate down for my personal preference. However, for the sake of this trial, I have used advised staking.

I found the advised odds usually available with two or more BOG bookies, but my results are calculated to the odds I was able to take. These are what I call ‘consumer odds’, as opposed to ‘advisor odds’. The headline results are

Even at my recalculated staking (say, half), this an excellent result. My own measure of whether or not a service is worth a second look is an average 20 points profit per month, so on points alone, this for me is a clear winner. It is, however, very important to consider the ROI. This one is lower than I would like, and the consequence of having a bad run with a lowish ROI when you are investing around 30 points a day is a rapid downswing, as evidenced on the July 25th 12-day plunge. That wiped out over 100 points, but a good, reliable tipster will recover, and Gary recovered well to finish the 3 month trial just about at the top of the graph.

There are some caveats to include. It is ABSOLUTELY ESSENTIAL to take the prices as early as possible. The SP result for this service was barely break even, before cost of subs. The profit to advised prices was 20 points higher than mine, so I am very happy with availability of odds. You could have made an EXTRA 50 POINTS PROFIT by avoiding the multiple bets (patents, yankees, etc) and that’s quite a lot. I can see what Gary is trying to do with that, and I am confident during the course of the year he will pull it off a couple of times, so it’s like buying a Lucky Dip (but with a higher chance of winning!).

Now, please forgive the following philosophising, but due to its roller-coaster nature, I believe this service is ideal for punters to discover whether or not they are cut out to be successful bettors.
I have to put my cards on the table here, and admit that I am a typical punter. I have joined literally hundreds of services, bought systems, been to seminars, joined betting communities, chased rogues through courts… What makes me typical is that I tend to throw in the towel after a losing streak. Although over the years I’ve learnt to take more pain, I still have that cut-off point where I doubt the system/service will ever recover, that’s it’s not just a losing streak, but that the service had previously had a longish lucky winning streak and now it’s showing its true colours. I have even given up on services when in profit because they have turned round and lost a lot of the profit!

On seminars and in forums I have met many other punters, and I am absolutely convinced that the vast majority of punters are exactly the same as that. I know in my heart of hearts that giving up on a service before I have lost the nominal bank is entirely wrong and bound to lead me into loss. And yet I still do it. I’m no inveterate gambler, and wouldn’t go anywhere near fixed odds machines. I am almost there. It’s just those losing streaks.

Now, with Pace Ace, take a look at the graph. 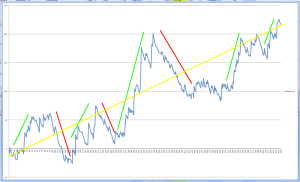 In the twelve days from July 25 to August 5 the service suffered a huge drawdown, losing over 100 points. This trial, of course, is a three month period during which time, in spite of a 100 point drawdown the service has made over 200 points. So, if you had joined the service on July 25, at what point would you have given up? I know I would have, probably after 3 or 4 days.

If I was playing you for Monopoly money, this is the service I would have picked, because of its record. I wouldn’t have worried about the drawdown. So how do I translate the Monopoly mindset to real money? Well, I know I have to allocate a bank, but I must be prepared to lose that bank. That’s the worst case scenario and I have to be prepared for the WCS without it causing too much pain. If the drawdown on the bank is too painful, your bank is too high. You have to see the bank as the whole bank. When I get down to half the bank, I’m not going to stop, join another service, and try to recover the bank that way.  My bank is there as my weapon, and I’m going to use it. This is how the pros do it. All of them.

With Pace Ace, the recommended bank is 200 points. In the three month trial, the biggest dent in that bank was -25 points. The biggest drawdown was -120 points. And yes, you COULD lose the whole bank. Of course you could. That’s the risk you sign up for. But if you find a service with a winning track record, and I am very confident Gary Hemming knows his horses, you’re much more likely to make a regular profit by sticking with it than doing what I’ve been doing for far too long, chopping and changing to the next ‘good thing’.

Please excuse the proselytizing, but I hope it has been helpful to some Cash Master subscribers.If it gets you into the WHOLE mindset, rather than 90% there, I think you will enjoy the fruits.

I have no hesitation in putting Pace Ace into the APPROVED category. Good luck, and stay with it!

You can try Pace Ace here: