AVERAGE ODDS AVAILABLE TO BACK = 6.79

The final review of the three month review which ended in July is below. However, I joined the service as a customer rather than a reviewer back in November 2014, and this has now come to an end. The ROI tells the story really, this was a service which swung around the break-even level. I found it a very frustrating service because Simon will find one BOG bookie price and base his stats on that price. He said in his discussion with me “That’s the point though David, the service has always advised not to back at SP and to take early prices. If you back at SP whether BOG or BF you will find it very difficult to be profitable. There is nothing dishonest in the reporting, just the absolute facts. They even include all rule 4 deductions so not enhanced in any way.”

Simon obviously knows everything there is to know about backing horses, so why has he got this blind spot that if you can’t find advised prices, you aren’t going to do as well as him? If he wants to give me those figures and tell me that’s how well he’s been doing, I’m happy to accept it. If, however, he wants to sell those selections as an advisor, he needs to report his results as an end user may report them. Otherwise subscribers are going to base their decisions on the results he reports, which are the best they are ever going to be. OK, he doesn’t want to report results to SP or BSP because he finds value, so how about checking the price availability one hour after he has sent out selections and reporting that, in addition to his advised prices?

The truth is, the service has made a profit over one year, albeit a small one in ROI terms, and Simon does know a lot about horses and uses his own ratings. To be fair, therefore, I am taking this out of the FAILED category and placing it the NEUTRAL category.

If you join up and find your prices experience the same as mine, maybe you could suggest he makes the reporting completely transparent rather than semi-transparent.

The original final report is below:

Well, who could fail to be taken in by the humorous videos by Gormley’s Angel Of The North, or the pub lunches watching the races which paid for them? As I’m sure you’re aware, they’ve been at it again recently, though not Simon Patton this time.

Simon is a very successful pro punter. He sells several services including access to his academy where he teaches you how he does what he does. He does that by searching for repeatable patterns in racing which make a profit. By constantly updating these results, he is able to enquire about today’s runners with the software, and comes up with the best. These then become the tips in his service. Therefore, you won’t see any reasoning behind the tips. You will just receive an email early in the morning, usually with 3 tips but there can sometimes be more or fewer. Simon also has a price cut-off point, so he won’t advise any shorties.

So – do they make a profit? Well, Simon gives all bets out to 2 point stakes or 1 point each way. As they are all level, I have recorded them as one point, or half point each way. In the past 3 months, the service has made a profit of +8.03 points to advised prices. So after you’ve paid the subs, depending on your stakes, you might have come out at around evens. At the stakes I was able to get, the service made -5.24 points, and at SP a massive difference of -45.5 point loss.

Herein lies the problem with this service. Simon gets up early and runs his software and as soon as he finds a bookie price, he puts up the bets. But these can be before markets have formed properly, or where one exotic bookie has a price at discrepancy with all other bookies. Here is a typical example of a Patton early Sunday: 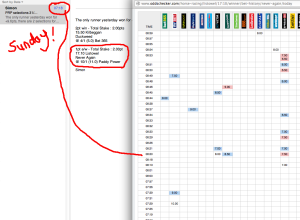 I signed up to Simon’s service last November and I did raise this problem with him, asking if he should give results to SP and/or when markets had become more mature, but he gave a Sepp Blatteresque refusal to acknowledge it as a problem. Going back to November, my losses are around 16 points for the service (or 32 if you use Simon’s recommendation). 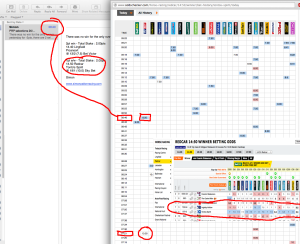 I’m sure Simon himself makes a good profit from his selections, and he seems more than a decent fella. But when I mentioned to him that the results had been disappointing towards the end of the jumps season, he told me that his real strengths are in the flat season. Unfortunately there has been no sign of this thus far. 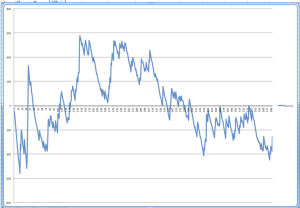 I feel that Simon is not one of your rip-off artists, and that there is something to what he does, but until he is able to address the major problem of price discrepancy and start to publish results to SP and maybe to prices where at least TWO of the big five bookies have the same odds, he is not going to be winning too many plaudits from genuinely independent review sites.

I can’t give this a neutral rating, because with a neutral rating you have to be able to at least see potential for a reasonable profit after fees, so I have no alternative but to assign this as a FAILED (+++UPDATE THIS IS NOW NEUTRAL, SEE ABOVE EXPLANATION+++) category.