The last time Michael at Bet Lucrative launched a system, I tested it for a whole year and failed it, after it made a small profit but not enough to pay subs. So why did I come back, you may well ask, to test the grandiosely titled Racing Revolution?

The truth is, what Michael is trying to do is exactly right – find winning strategies with the help of Horse Race Base, test them without money, then with small stakes and, after a period of time (maybe 3 months) if the profit is building, you invest properly. This can be done on Betfair SP, so available to nearly everybody who has access to the exchanges.

What you get with Racing Revolution is a brief introduction to Horse Race Base and how to create your own system. This is certainly something I would thoroughly recommend. Even those of us who don’t want to do all the research, just want to be told what to bet on – once you’ve had a go at this and found your strategies, for a meagre £10 a month HRB will tell you what to bet on – even to the point of automated emails. However, Michael’s how-to videos are far too brief, and I would recommend going to Horse Race Base’s own YouTube channel where you’ll find all the help you need.

Included in the subscription cost of Racing Revolution are four of Michael’s tried and tested systems, and I have tested these over the past three months.

Of the four systems, three made a profit and one failed with no real signs of promise,so lets look at that one first.

The all-weather system, Whatever Weather, gave 68 bets at average BSP odds of 6.7 and there were 12 winners and 56 losers giving a loss of 39% of the bank. Stakes were 2% of the bank.

The lay system, Lay Lucrative, did slightly better than break even. Of 26 bets, 5 were unsuccessful lays and 21 successful. Lays were at 4% liability of the bank, and resulted in a .61% profit. Average BSP odds were 7.3.

Finally, the heavy going system, Heavy Hitters, was the star of the show but looks like hadn’t been previously because the stakes were 1% of the bank, unlike the other backing systems at 2%. There were 22 winners, 72 losers and 2 non runners for a profit of 31% of the bank. Average odds here were 10.25. 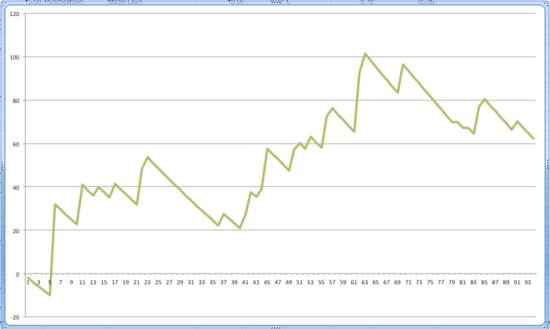 Overall if I had started with equal banks for all four systems, I would have broken even before subscriptions. This was very similar to my previous experience, where I failed the service. However, it has to be said that without the all-weather system and if the heavy ground system had been 2% of the bank, it would have made a healthy profit and I would have passed it.

So I’m going to award this a NEUTRAL rating. It looks professionally run and testing by other sites have given it the thumbs up. But if you sign up, you have to be in it for the distance, you have to commit your banks and not waiver. I have mixed feelings about these backfitted systems, some of them work and others don’t. Michael has been around for a while now, and I’m confident he’ll be around for a while longer.

You can try Racing Revolution HERE