When I began this review six months ago, I used the headline:

and this was my blurb…

I hope that headline does the trick. Most of us are losing run averse, and this service certainly has its admitted fair share. This is run by Bet Kudos, part of the Betfan stable. A gripe I often have with this lot is the various staking systems. However, Renegade Racing results are given to one point level stakes – just my sort of staking assessment. A 120 point bank is recommended. Tips are delivered by email or accessible in the members’ area online. I’m not sure how many to expect but if today is typical, there were 11 this morning.

The 14 weeks of proofing thus far have been hugely impressive: 330 points. There are 150 slots available. With those kind of results, I simply had to put my hand up for a review. If you can cope with the drawdowns, this could be a goldmine.

Well, if this service hasn’t fitted the Law of Sod EXACTLY, then nothing can! You can see from this official graph how the service was doing BEFORE the blog, and AFTER I came on board: 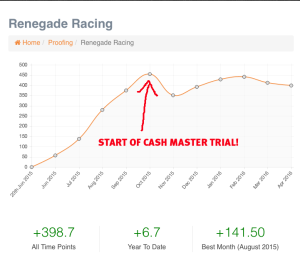 Now I’m beginning to feel it’s me putting the mockers on! Actually that graph wouldn’t look so bad if it only represented a couple of dozen bets. But over a thousand bets and it starts to look a bit ugly. That longest losing run, by the way, was 67 and there were other runs approaching that figure. Now I can usually tell from looking at a graph whether the service is worth a further look, so here is the six month graph from back in October: 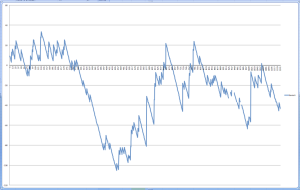 With average odds of over 14 there is always going to be variance, but even taking that into account this is not a graph which is shouting at me to get on board. Rather, it’s telling me I haven’t been skiing for a while!!

I do wonder if the change in fortunes has anything to do with the tipster being better on the flat than the jumps. Indeed, a majority of his winners were on the all weather courses. And he had some decent winners right up to odds of 51.0.

Here are the stats:

Now if my hunch is correct about this service being successful on the flat, then this blog came at exactly the wrong time and is about to take off again! The fact remains, though, that this has been an unsuccessful trial and I have no alternative but to FAIL it.

You can try Renegade Racing here: