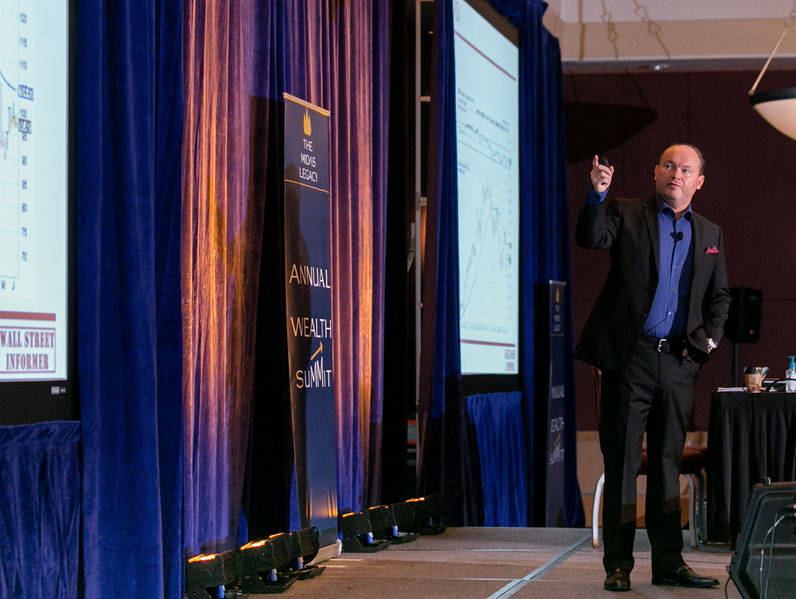 At the beginning of July this year I went along to a weekend seminar at Heathrow hosted by well know trader Jim Hunt. I was expecting to learn a specific new trading strategy he had devised but what I was actually shown was far, far more than that.

It was a full weekend of stuff, starting on the Friday evening and continuing all day Saturday and Sunday. I had the pleasure of meeting a few CashMaster readers while I was there too.

It turns out that Jim is a bit of a mentor. His aim is to teach you how to become financially free and that isn’t just a matter of following mechanical systems, rather adopting the right approach to trading from the outset, as well as embracing other money making ideas.

Over the weekend we learned four specific trading strategies:

‘The Grand Plan’ (Weird Trick) – This is Jim’s signature system that allows us to spot long term trends that make huge gains on the stock market while avoiding ALL the bear markets. Quite simply, this is brilliant. He showed us charts going back 35 years where this system identifies exactly where to get in and ride a massive bull market, and then getting out and going to cash (not trading) just as the market drops, avoiding all the market crashes. So just sitting on your cash during these bear markets meant you were doing far better than ALL the fund managers that had to trade regardless.

It’s made massive gains over the last three and a half decades, averaging 36% a year while only trading 0.6 times a year, and the system is currently showing a trade that has been running for a full year making a huge return so far and showing no signs of stopping just yet. Also, had you traded it using leverage you could be looking at a staggering return with just one trade and literally nothing to do for a whole year except check the chart once a week for thirty seconds.

The second trading system we learned was ‘High Fliers’. This system showed us how to spot and take advantage of short term trends where we trade individual stocks that are looking to make healthy gains. Essentially it’s like boarding a speeding train but waiting for it to slow down for a signal so it’s safer to board. It’s about reducing risk. We don’t second guess whether a stock is going to go up or not; we WAIT for it to go up, then look for the lowest risk entry point. It’s a bit like goal-hanging in football. If we lose we lose a dollar, if we win we win ten dollars. It’s his most proprietary and most successful system. Jim actually sends out weekly videos showing his trades with this system and this year has made over £71,000 spread betting these (tax free) at £10 per pip. All 99 club members get these videos so it really is just a matter of copying what he does although we learned the rules to do it ourselves.

‘Pennies from Heaven’ was the third system we learned. It showed us how to identify ‘Falling Angels’, or stocks that have taken a dive and are currently selling for less than $10 that have a high chance of shooting back up again. With clear entry/exit points and risk management this system is an extremely low risk/high reward strategy.

Finally ‘Rogue Trader’ – This was Jim’s latest system that spots earnings ‘beats’. Four times a year companies release their earnings reports and the idea behind this system is to identify companies whose actual earnings are higher than the predicted earnings, and then to place a trade on those companies just before close of day BEFORE the earnings report is released to hopefully cash in on a price spike the next morning when the data is out. To date this system has had a 100% success rate in correctly identifying earnings beats.

But that wasn’t all. Jim also covered other things you should be looking at to achieve complete financial freedom, including property and business and in fact includes a ready made ‘business-in-a-box’ with the membership.

At the end of the weekend we were given a ‘golden’ dongle which contained a load more stuff including certificates of entitlement to access ALL of Jims past and future products free of charge and a special video showing his ‘Elastic Band Trading Secret’, which is something that can be used once a year that is extremely powerful and has, as yet, never failed.

To say this was information overload is an understatement. Fortunately, a few weeks after the event we were sent a DVD recording of the seminar so that we could go back over any of the information at our leisure. We also got Jim’s personal mobile number so that we could call him for help or advice whenever we need it, plus as I mentioned previously, as 99 Club members we also get ALL his current and future products free of charge. We were encouraged to work our way through these strategies one at a time, taking care to learn them and practice them, so we don’t get overwhelmed with the volume of information.

It really seems that Jim tries to deliver over and above what you might expect from an event like this. I certainly wasn’t expecting to learn quite so much and have really enjoyed his weekly videos since attending in the summer. I decided to paper trade while I get used to the strategies and am silently kicking myself somewhat that I didn’t put real money on the High Fliers as they’ve been doing exceptionally well.

I must admit I found the Rogue Trader strategy quite difficult, purely from a personal perspective, as the trades are put on just before 9pm UK time and you’re generally watching several different ‘potential trades’ in the hour leading up to that which is really inconvenient for me at that time of day as I’m often out to dinner or at a concert or some such. My results were hit and miss too even though the strategy correctly identified an earnings beat on every single one. It’s definitely got potential I think and I’ll give it another go next earnings season.

My temperament is more of an investor than a ‘day trader’ though, so for me the long term trades are much more attractive. I’ll certainly be getting involved with the High Fliers with real money in the new year and am looking forward to getting in on one of his signature ‘Grand Plan’ trades if the current one ever comes to an end! I shall also be ordering a couple of his other strategies (for free) and learn those too as I much prefer trading on a weekly or monthly (or yearly!) basis.

Needless to say, The 99 Club gets an APPROVED from me.

Jim is running another seminar in just over four weeks time on Jan 13th-14th in London. If you want to learn all of the above then I highly recommend it. I shall be going too so come and say hello, it will be nice to meet you. If you can’t make it to the live event you can get the DVD’s delivered anywhere in the world.

This year he will be covering much of the above, including his signature ‘Weird trick’ system, but will also have some new modules including how to make a mint from BitCoin, and something very important that is going to change a lot of the trading rules over the next fifteen to twenty years and is happening right now!

Of course by becoming a 99 Club member you also get access to his entire back catalogue and all future products free of charge, including his direct line number for support whenever you feel the need.

Spaces are limited so if this is of interest you can find full details HERE.

Unfortunately membership is now closed on this club.