I managed to get 20 pips Tuesday morning. Actually I thought I was going to get stopped out at -5 pips but my 3 pip buffer saved me and the market turned back up again. As the tufxp program stopped the trade sequence I moved the stop myself hugging the bottom of each candle to lock in some profits. The trade had already gone to 40 pips before retracing back to nothing so I was keen to get something out of it. 20 pips was fine. 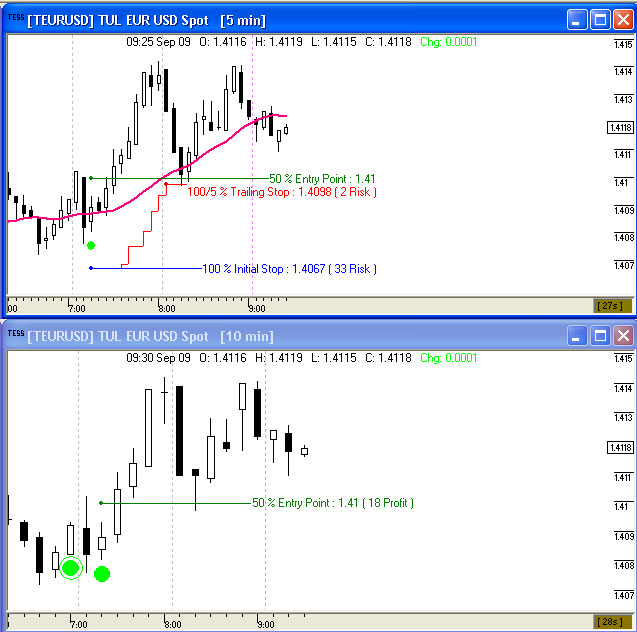 I’ve been getting lots of feedback from other readers with their strategies for tufxp and I’m tempted to have a go at some. As it stands, we all know the technique I’ve been using for the last three months works well. If you want to make money with tufxp then you can be pretty certain that you will if you stick with my settings to the letter. It’s made an average of £1000 a week at £10 a pip so that can’t be bad. However it does have disadvantages too. You will often have no trade days. You will often make a load of pips then lose them all again which can be very frustrating. You will often open a trade and have it running for hours. None of these are a big problem if you have patience and discipline and are prepared to see it through. From what I’ve been hearing from others though, if you go for scalping, especially using my entry techniques, then you get a very high strike rate and by compounding your bank and going for ever increasing amounts per pip, you can make a significant profits in next to no time.

The main disadvantage that I can see to scalping though is that a losing trade will generally cost you more than you make on a winning trade so you do need a higher strike rate to make it profitable. What I’m going to do from now is monitor how I would have done had I been scalping for 10-15 pips a trade and compounding at 0.35% per pip.