First of all, for those that asked, when I refer to trading the ‘Cable’ market, I mean the GBP/USD currency pair. I have no idea why it has this nickname but it does.

Also, I had an e-mail yesterday from Jamie who came up with an interesting suggestion:

“I have been using TUFXP for around three months now and have been trying to find the optimum settings. Similar to your own settings I use an intensity of 10 and only take a trade when the signal is filled on both the 5 and 10 minute timeframes. Due to the low number of trades generated with these settings I have been backtesting also entering the market when the signal is on 2 of the 3 timeframes – 5min, 10min and 15min. Have you ever looked into also including the 15minute chart and using this if the trade is showing on either the 5 or 10 but not both? If so what was your verdict as it appears to be a great way to increase the number of qualifying trades and subsequently profits. I’m a risk analyst for a bank by trade and find by using 2 timeframes simultaneously the risk/reward balance appears to be just right. I’m not a forex expert by any means but it looks like people go wrong when they constantly change their strategy and enter/exit trades without any real conviction.”

Well, I had a go at setting up the chart today with three different time frames 5, 10 and 15, using three different feeds, thus giving me nine charts on my screen in one go: 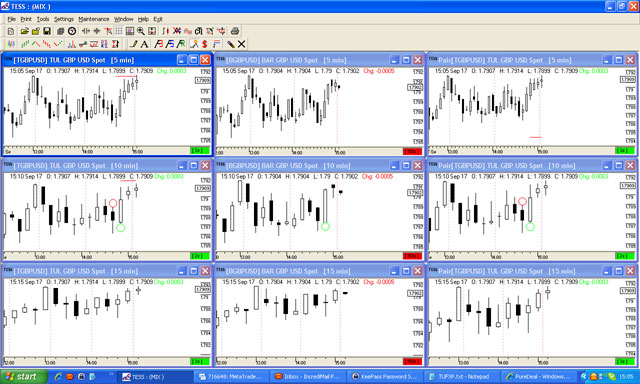 Now today, we had loads of sideways movement and no qualifying trades but with nine charts running it’s a lot noisier! The PTP warning signal sounds like a laser gun and when you get five or six going off at the same time it certainly gets your attention. My wife thought I was playing space invaders!