It’s certainly true that by trading on Forex everyday you start to learn to ‘read’ the market. I have not had it in me to do any studying of this business, and I rarely watch the daily update videos that you get in the members area for Tufxp. However, today was a good example of me actually using my nonce to good effect.

I had a confirmed PTP signal on the 5 and 10 minute charts on the Barclays feed to go long just after 9 this morning. Now, I looked at the hourly chart for the GBP/USD to see what the market had been doing since yesterday and noticed that since 9pm last night it had been going sideways bouncing of a definite resistance line around 1.8600. It bounced back off this line about four or five times.

So when I got the signal to enter a long trade at 1.8581… just 19 pips away from this definite resistance line, I wondered whether this would be a good idea. Still, the software was indicating to take the trade so I did. However, I entered at £5 a pip instead of £10 as I just wasn’t confident and the trade indeed went long as far as 1.8606 before bouncing back down again. Thinking back, this would actually have been a good time to scalp and take the profit, but I don’t do scalping. I did however, make the decision to take the risk out of it and I moved my stop up to my entry level at 18582.1 which was obviously not sticking to the 5 bar trailing stop that I normally do. On this occassion it was the right decision as the market moved back down to stop me out a break even but continued down to 1.8554 which, had I moved the stop in line with the tufxp 5 minute chart (plus 3 pip buffer) would have meant a losing trade of 21 pips.

I was actually pretty pleased with myself this morning by doing this however, my concern is that this is moving away from the completely mechanical approach I like to adopt. The problem with using my own judgement is that I could be wrong as often as I’m right which could mean losing out on good trades because I ‘decided’ it was too risky or whatever. It also brings the dreaded emotion into the equation. The beauty of my mechanical settings is that every trade is ‘correct’ whether it wins or loses. If I start using my judgement then I could make bad decisions in which case not all trades will be ‘correct’. I read about this when I studies the Ian Williams EzTrade System. He is very much into every trade being a ‘good trade’ whether or not it wins. As long as you have done everything right then it’s a correct trade and as you are always going to get a few losing trades this doesn’t make it a bad trade, it’s just the way it goes.

Still, I can’t help feeling that I was right to move my stop earlier today, and not just because it saved me from a losing trade. I’m probably unconsciously seeing things all the time that make me confident or not without me actually realising it. Like when a trade has no recent highs or lows anywhere near it or it’s not close to any moving average lines etc then I guess there is nothing really stopping the trade going in the same direction.

There were no qualifying trades in this afernoons session except one that was before a high impact news release so I didn’t take it. 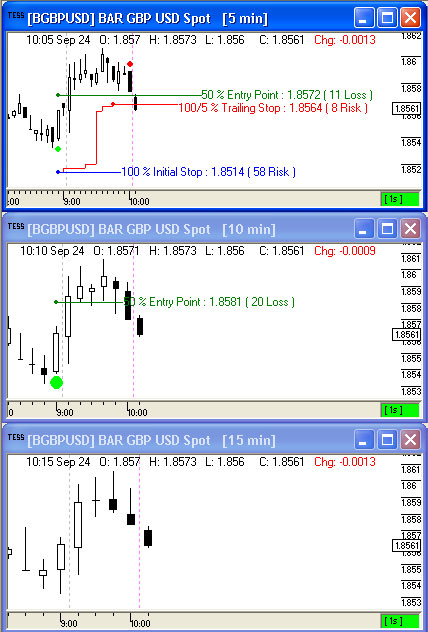