An interesting thing happened on the charts this morning. There was a sell signal just after 7am on the 5 minute Tullet feed but matched on the 10 minute Barclays feed, and not on the other charts. I’ve not seen this before and would probably not have taken the trade although if I had it would have produced a 42 pip profit on the trailing stop. The trade went 99 pips into profit so I would probably have got 70 or 80 pips out of it by moving the stop manually: 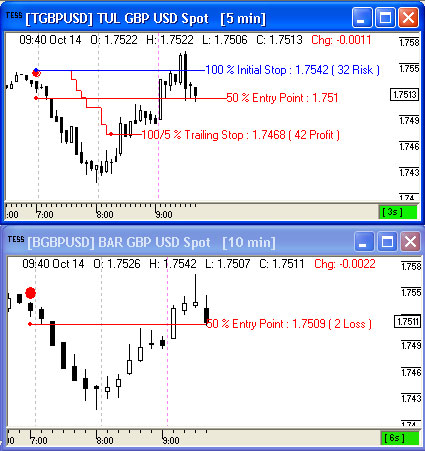 This brings me nicely on to the issue of exit strategies again. A couple of people have e-mailed in asking about what I’m doing now if I’m not using the 5 bar trailing stop as the exit. Ok, so basically I’ve done well using my method (which I will write up into a separate UFXP page when I get a spare minute) whereby I simply move my stop in line with the 5 bar trailing stop (plus a 3 pip buffer) and the trade closes when the market hit’s the stop. So I would just manually move the stop in IG Index whenever the stop moves on the UFXP charts. This worked well but the thing I noticed was that I was giving an awful lot of pips back to the market before the trade closed. Ok, some trades went on 100+ pips, but the majority seemed to go 60 or 70 pips into profit and then retrace and I would end the trade with only 10 or 20 pips, or even nothing! I was still making a profit but when you are trading at £10 a pip it’s heartbreaking to see a profit of £700+ go right back down to £100 before closing. And I think this is the reason why I have recently backed off from using the 5 bar trailing stop.

The problem I have now is that I’m not really using a method at all for moving the stop, and as we all know, if you don’t have a proper method then you are creeping into the realms of gambling rather than investing. I have found myself moving the stop to breakeven when the trade has gone around 20 pips into profit. The idea is that I am getting out of a risk position as soon as possible so if the trade suddenly reverses, at least I don’t lose anything. The problem with that though is that a lot of trades do reverse into a negative position before going on to make great profits, so if I move my stop to breakeven too soon, then I could get closed out and then see the market go onto to make a few hundred pips and I would have missed it. We all know this is forex and there are an infinite amount of possibilites and I simply don’t have the historical data to know if moving my stop early makes more profit over the longer term. All I know is that taking the risk out early certainly is easier to cope with psychologically.

So how do I move my stops now? As I said I don’t really have a set system in place at the moment. I tend to follow the trade around 30 pips below the current position but I close the gap if it looks like the market is going to stall. How I judge that is anyones guess. I think after five months of watching these charts something must be sinking in. I think I am learning to read the market without quite realising how. This is no way to run the business however and so I will endeavour to come up with an exact exit strategy that I am happy with. A couple of weeks ago one of the readers mentioned using the Stochastics tool to determine the exit, so you would close the trade when the two lines crossover. I have to admit I haven’t tried this out yet but it may well be something to have a serious look at… in fact I’ve just checked this mornings ‘possible’ trade and had I used this indicator I would have exited at 1.7425 for an 85 pip profit… double the profit on the trailing stop. It was also practically at the peak of the trade too. Interesting. Ok, so from now I’m going to monitor the Stochastics exit stratergy and see how that gets on.

Around 10.30 today we got a buy signal at 1.7527. I made 50 pips profit by moving my stop by 10 pips whenever the market moved upwards by 10 pips or so, keeping roughly 20 pips below it. I monitored the Stochastics indicator too and when the market retraced slightly at around 11.50 it hit my stop at 1.7577. Interestingly this was at the exact point that the two lines crossed on the indicator so I guess this was a good trade: 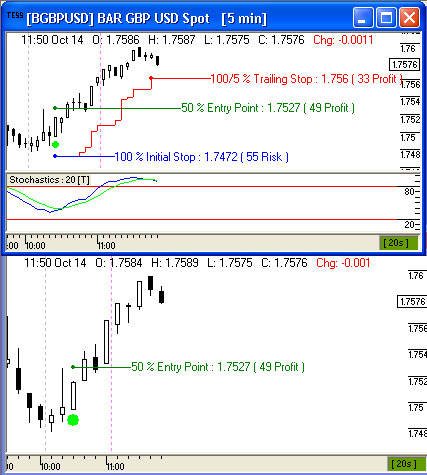 I left the PTP calculation tool running to see how the 5 bar trailing stop would have got on and it made 46 pips but took two hours longer.