I had an advantage on this mornings trade. When I loaded up the charts around 9.30 it became apparant that a sell trade was indicated at around 8.30. As I looked it was around 20 pips in a loss position but it had a sell signal on the 5,10 and 15 minute charts on the tullet feed and a sell signal on the 5 and 10 minute charts on Barclays. I decided I would go for the trade and take the 20 pip advantage so I opened a short trade at 1.7464. Very quickly the market moved back down and I moved my stop to break even within minutes, and then to 10 pips profit, although I thought probably a bit early because the market bounced back and stopped me out at 10 pips within 20 minutes. It turned out that the market reversed completely though so getting the 10 pips was lucky: 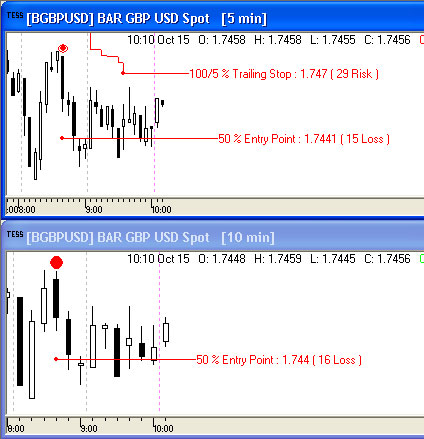 Irritatingly, the buy signals on the different charts were more than 15 pips apart and at slightly different times so I didn’t enter a buy trade. It then went well over 100 pips which was annoying, but I suppose we can’t get on all of them.

Steve e-mailed me today to say that there are two new pdfs that you can download in the members area which contain very specific entry and exit criteria. He mentioned that he applied them today and made a small profit whereby the trailing stop would have made a loss, and the entry crieria also kept him out of a losing trade. Anyone using tufxp might want to consider having a look at those pdfs… I’ll have a look in the morning.

Also, I got this from Tony which is interesting:

“Following your very interesting and detailed blog (Tuesday 14th Oct), I can confirm that I have also followed the Stochastics chart recently. Interestingly when you look at the sell signal that TESS gave on the Tullet this morning the Stochastics chart showed that the currency was neither over bought or over sold, in fact as it was in the middle of the chart, presumably there was a 50/50 chance that it could move up or down. Perhaps that was an indication that it would be sensible to stay out of the market, I took the trade and lost 25 pips.

When there is a cross over below the 20% line it does seem to reinforce a buy signal i.e. it’s over sold and when there is a cross over above the 80% line it reinforces a sell signal, as Stochastics is indicating that the currency is over bought. By using this additional chart it appears to provide a better guide to what might prove to be a successful trade just as it helps to get out of a trade if it turns against you.

Hope this is of some use.”

Thanks Tony (and Steve).

Please feel free to e-mail in with your ideas and/or success stories, or failures, with tufxp. Knowledge is power, so they say, and if it means we can all benefit then bring it on!