There was very nearly a qualifying trade just after 8 o’clock this morning on the Barclays feed, but with a 16 pip difference between the 5 and 10 minute charts it was just out of range, which was lucky because it would have lost.

There was a qualifying trade at around 10.50 this morning but I decided against entering. If I had entered I would have been able to move my stop to breakeven as it went into 20 pips profit before retracing. The reason I didn’t enter was because, after yesterdays battering, I took a broader look at the charts this morning and could see that it was still pretty much sideways movement with the market unsure which way it wanted to go. I also used the Stochastic indicator to double check my suspicions and on both the 5 and 10 minute charts, the lines were pretty much in the middle which mean’t that the market had been neither overbought nor oversold which again added to my suspicion that this would not be a good trade to take as it could really go either way. My judgement was correct on this occasion, although had I taken the trade I still wouldn’t have lost anything: 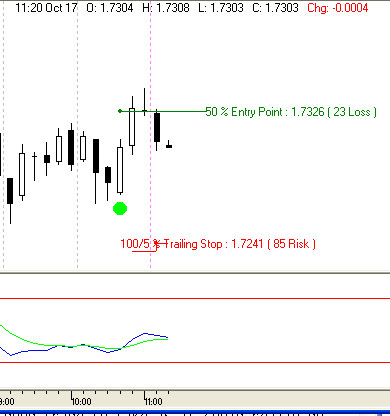 By the way, I’m getting more e-mails from readers now with their hints and tips and strategies and they are all very welcome. Thanks for that and keep them coming. I am going to set up a specific section on this blog just for Tufxp (I know, I keep saying that but I have a lot of balls in the air at the moment so please bear with me), and I’ll include readers tips in there so that we can all benefit. If you have a method that works well and you want to share it then by all means let me know and I’ll put it up here.

For now, here’s a clearer explanation of the Stochastic Indicator and thank you Steve for letting us know:

“steve here, i emailed you a week or two ago about using the stochastic indicator as a guide for exiting trades. in addition to this they are a great indicator for entering trades as well because the crossing of the lines indicates a trend change.

the reading of this indicator might be a bit alien to you and some of the readers of your website as we haven’t had an insight into this tool  through the tufxp overviews.  to save you googling or researching this indicator i’ve put together a quick summary of the signals to look out for below.  this is only a general idea – there are things like divergence and all sorts of other things to consider, but i like to keep things simple so i just go by these general signals.

1. when the lines cross this indicates a trend change

2. if the lines are above the 80 level then the currency pair is considered to be overbought (so further buy signals should be ignored)

3. if the lines stay above the 80 level the uptrend is considered to be running strong

4. if the lines exit the 80 level (i.e. move downwards) expect a correction or beginning of a down trend

5. the crossing over of the lines in this overbought area (above the 80 level) is considered to be a strong indication of  a trend change

the same principal applies to the oversold area below the 20, but in reverse obviously.

hope this helps you understand the basics behind the stochastic indicator – i personally think it’s a great ally in considering when to enter and exit a trade.  it’s not right all the time but hey, if such an indicator existed we’d all be millionaires already!”

The market continued to drift sideways this afternoon and again the Stochastics indicator warned me off entering a long trade just before 2pm which again would have been a loser: 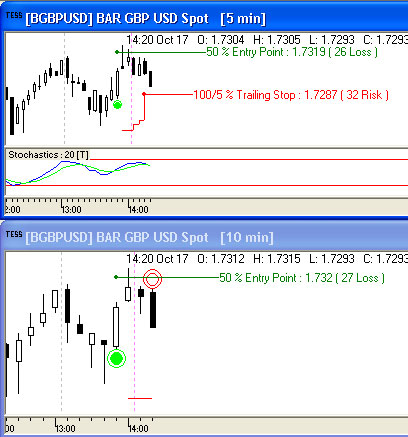 With the market going nowhere today and it being a Friday, I quit for the day at 2.30. Only £300 profit this week having lost a chunk yesterday but onwards and upwards!