I took another ‘out of hours’ trade this afternoon as there had been nothing at all appearing until around 12.45 when I got a buy signal on all three time frames. I placed an order to open at 1.5585 and the trade went 93 pips before retracing and stopping me out at 1.5645 for 60 pips profit. So thats £2050 profit this week which makes up for the poor performance of only £300 last week. 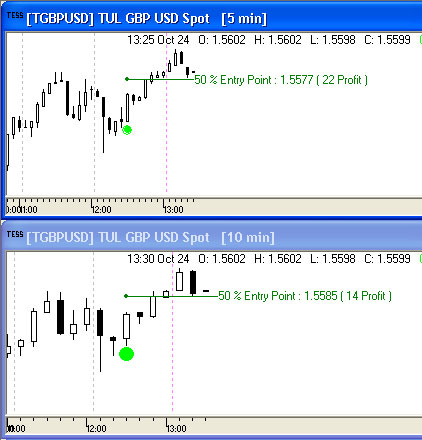 I think I’ve almost completely abandoned the 5 bar trailing stop now although, to be fair, it does work and does make money, it’s just that I that I seem to be doing better moving my stop manually, trailing the market by eye, so to speak. I’ve had a few people ask about how I move my stop and it’s not an exact science yet, but generally I let the trade go 20 to 30 pips into profit and move my stop to break even. Then I’ll move my stop every by 10 pips every time the trade progresses another 10 pips, staying roughly 20-30 pips behind the market. If the move seems to be stalling, for example, if it’s nearing a moving average or local high or low, then I’ll squeeze the stop closer. The problem, as ever, is that getting too close doesn’t give any breathing room and a small retracement could stop you out too early and you could miss a larger movement, but there will never be a perfect solution.

I have an update from Tony on his one minute chart trading too. I forgot to post last weeks so thats included too. Thanks Tony.

“Here is the update for the TUFX 1 minute pair, for week commencing:

Number of bars to qualify in;3

It looks increasingly likely that the first week of my trial was just a one off. After a great start during the first week my second week and third week have both resulted in substantial losses. Last weeks 55 pip loss has been followed a similarly bad week with a loss of 50 pips. The running total for the first 3 weeks now stands at a loss of 10 pips. It has been a trying week yet again with the currency swinging about wildly for the best part of the week.

Here is the update for the TUFX 1 minute pair, for week commencing:

As I commented last week it does appear that the first week of my trial using the one minute chart for scalping was just a one off, see results below for this weeks trades. Total loss for the week is 70 pips.

As I have been monitoring the one minute chart for scalping I have also recorded the results using a trailing stop. I have TESS set with a trailing stop of 5, I havent changed that for the one minute chart. The results appear at this stage to be much more promising. I have deducted 3 pips from each trade to allow for the spread and the results reflect this. I believe that it would have been possible to improve these results significantly if the stops had been managed more effectively, for example there have been three great sell signals and one buy signal this morning (Friday 24th) that could have resulted in a further 246!!! pip maximum profit with better management. Again as an example the first trade after 13.00hrs produced a 26 pip profit, there were however a total of 64 pips on offer (both gross) a further buy signal at 14.42 could have achieved an additional 71 pips. It is fair to say that this has been an exceptional week with 585 pips coming today.

Tony”
Next week could be tricky as it’s half term at school and I will have my four year old knocking around the house creating general havock so my trading may be a bit hit and miss. I will certainly check the charts to identify trades using my method even if I miss a few myself, for those wanting to check theirs with mine.