Another interesting week with TUFXP and it would have been very profitable except that Friday had two losing trades taking much of the previous profit back. Still we ended the week in profit and I suppose you can’t have winning days everyday.

I’ve heard Mondays and Fridays are not as good to trade and this week was no exception. A clear sell signal on both GBP/USD charts on Monday morning resulted in a 16 pip loss for me although it could have been worse had I not entered when it had retraced slightly. Whats interesting is that if I had followed the stop loss on the 10 minute chart I would actually have got a 33 pip profit, but I always move my stop in line with the 5 minute chart and I still think over the long run this makes me more pips than it loses: 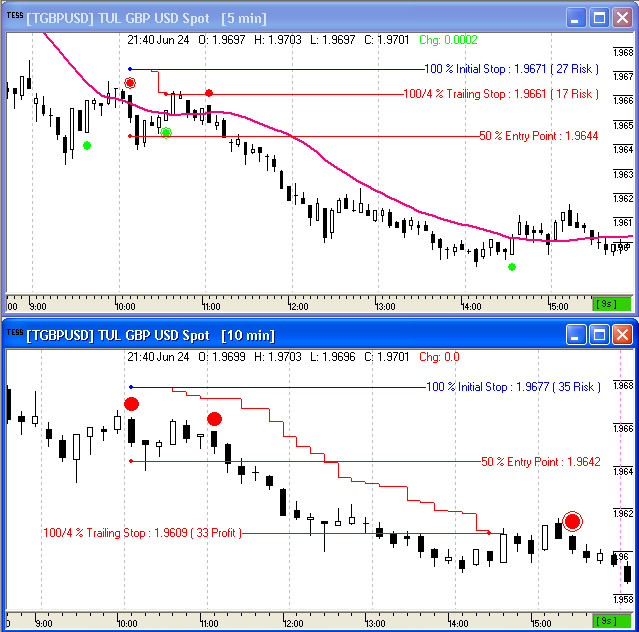 There was also another trade just after 11am which would have made a nice 41 pips but I had stopped trading at 11am. Oh well: Tuesday was a better day for me with a nice 33 pips profit on EUR/USD although at one point I thought I was going to get stopped out… just shows how the four bar trailing stop gives the trade room to breath: I made another 40 pips on Wednesday on GBP/USD with a straighforward morning trade: And Thursday gave me another 8 pips first thing: Friday was disappointing with an 18 pip loss for me first thing and another 29 pip loss in the afternoon, my biggest losing day since using tufxp. Still, I made an 18 pip profit over the week and although losing days are disappointing, they are inevitable and have to be taken on the chin. So the profit for the week was a modest £180 on £10 level stakes, or £903 if we are continuing with the staking from the paper trading:

Friday would have been trading at £265 a pip which is really going into silly figures now but I have been advised that IG Index will allow up to £500 a pip so the above scenario could be possible, assuming the trades got matched in time.

I’ve been asked to keep posting my trades even though I have already approved this system because a few readers have purchased this system and wish to trade with the same settings as me so I hope you guys find this useful.