I was unable to trade yesterday afternoon due to having a wisdom tooth and two molars extracted (ouch) but looking back at the charts showed a winning trade of 30 pips just after 1pm: 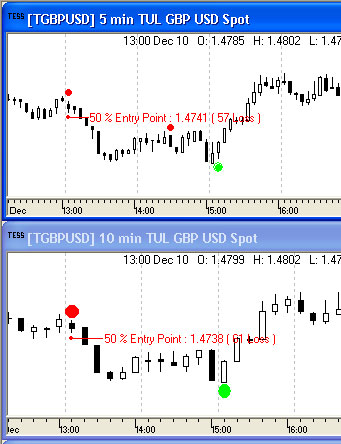 I had another breakeven trade around midday today. This seems to be a good month for scalpers as I’ve had a few trades go 20-30 pips into profit before retracing and stopping me out at break even: 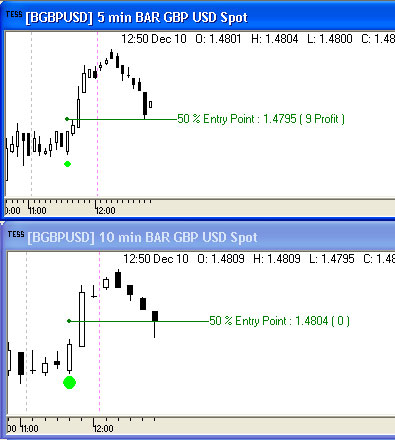 I didn’t trade again this afternoon, this time due to my daughters Christmas performance at school, but looking back this evening there was a maximum losing trade of 35 pips just after 2pm: 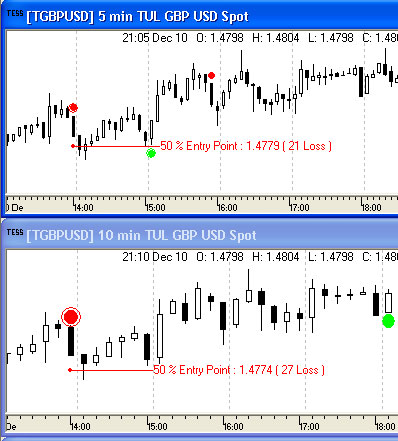 December is turning out to be a lot like August, on the GBP/USD charts anyway. I know a lot of traders don’t trade in August and I suspect December may be another tricky month… not having traded it before I wouldn’t know but I’ve noticed not much action over the last week or so using my method.

One other thing I need to point out. I’ve had two e-mails from readers using my method that have been entered into a trade using the Order to Open that didn’t show up on the TESS software because of the slight difference between the price showing on TESS and the price at IG Index. This hasn’t happened to me yet, probably due to me not trading when it’s happened, but it could be a problem. I use the Order to Open because I found that occasionally I was  having trouble getting into trades after the ‘bong’ as the price was changing too fast, and sometimes it had moved 20 pips or so before I could even enter. Using the Order to open gets around this as you get in at the price you order, but the flip side is that you might get entered into a trade that only just missed qualifying using my method (i.e. it gets close to the entry point then retraces, but in IG it hit’s that point).

I’m not sure of the best solution to this. It may be that we set the Order to open a few pips further away from the entry point indicated on the TESS software.