I’m definitely getting better at this. Sort of.

There would have been a great trade on the EUR/USD this morning but I don’t enter a trade if there are more than 15 pips between the 5 minute entry point and the 10 minute entry point. Shame as at one point it made over 170 pips profit on the 5 minute chart but even so stopped at 143 pips profit with the trailing stop. So I’m partly gutted that it didn’t qualify as a trade using my settings but on the plus side it also saved me from entering a couple of losing trades this afternoon. The GBP/USD has been moving almost exactly the same as the EUR/USD today except that there was a trade on the GBP/USD 5 minute chart (but not on the 10 minute) that would have produced a staggering 252 pips profit with the trailing stop.

With such a large movement in the morning (anything over 100 pips is big) it’s never advisable to carry on trading in the afternoon. At least I remember something to that effect in one of the daily videos. 100-200 pips is generally about as much as the market likes to move in one direction in any particular trading session and as I expected after the  big movement this morning the market began a period of sideways movement from around 11.30 onwards. So when I got another sell signal around 1.30 on the GBP/USD I made an executive decision not to get involved and rightly so as it bounced right back up again and would have been a losing trade. Back to the EUR/USD and the chart again matched the GBP/USD with sideways movement but bouncing dramatically up and down within a sideways channel. I think scalpers out there could have done well with this but again I steered clear when I got another sell signal on the EUR/USD because it looked to me like it was just going to bounce again. Again I was right not to get involved as it would have lost too. 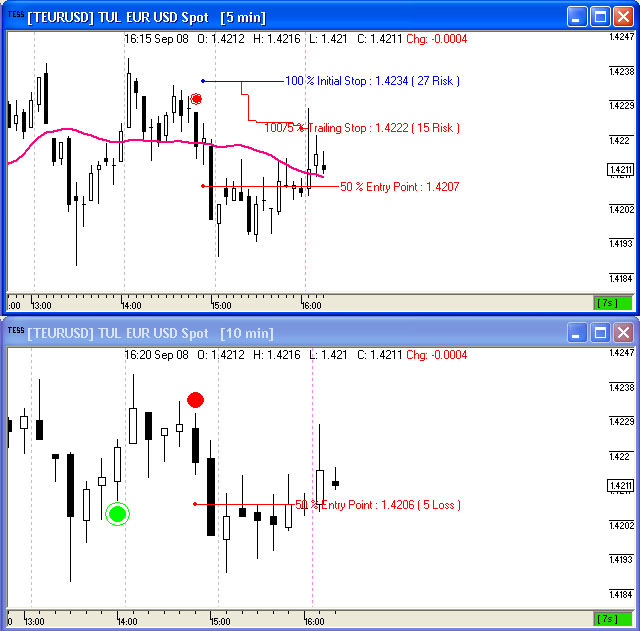 So the moral of the story is if the market makes big movements in the morning take the rest of the day off and wait for it to get it’s breath back.

Now last Friday I was talking about exit strategies and I got an interesting e-mail from Gina about her trading plan:

My exit strategy is tied up with my business plan.

The first forex course I did earlier in the year showed how powerful compounding is and the importance of a business plan.

So I trade generally in the morning from 7am in the UK (I am at our house in Spain at the moment).  However when in Spain and away from my business in the UK I tend to look more often during the day.

I do also watch the daily overview and find very useful the other tools Keith teaches.  I use fibs and resistance and support lines.

I am generally only in a trade for a few minutes.  I mentioned to you a few weeks ago that in the early morning particularly the Euro and GBP against the USD tend to follow each other and with some momentum on most days so it seems a great way to earn my 10 pips before breakfast!!”

Thanks for that Gina. I remember when I started paper trading Tufxp I used compounding to turn a £2000 bank into £100,000 in about eight weeks! I’m currently trading at a level £10 a pip but I think compounding is the way to go.