I had an e-mail from a new TUFXP user over the weekend asking why, if my settings work so well, I’m tinkering with different ideas and strategies. Well the answer is simply that I’m interested in it. I know that I could continue as I have done for the last four months and continue to make a pretty good income from it. And I would recommend anyone starting out with tufxp to give some serious thought to using method that I have found, quite by chance, to work so well. However, in the spirit of nothing ventured, nothing gained, I am going to try out some other ideas over the next few months. First, as I know new users like to check their trades against mine, I’m not going for anything radically different. I’m going to try out an idea one reader e-mailed me about on Friday… namely using the same method I have been using but running it on three separate feeds concurrently… Tullet, Barclays, and the Tullet/Barclays Pair. The idea is simple. Since the different feeds tend to give different trade signals, by running all three I ‘should’ get more trade opportunities. So those that are just starting, then you will be able to check your trades against mine and it won’t matter what feed your using as I’m using all of them!

So I’ve set my chart up as in the picture below, with the 5 minutes on the top and the 10 minutes below. Although, disappointingly, I didn’t get any trades today, I was surprised at quite how different the candlestick patterns were on each chart. Lets see how we get on the rest of the week.

For now I’ve dropped the EUR/USD and I’ll see how I get on concentrating on the cable market. I’m also going to have a go at trading a lot of different markets at the same time, but that’ll come later. 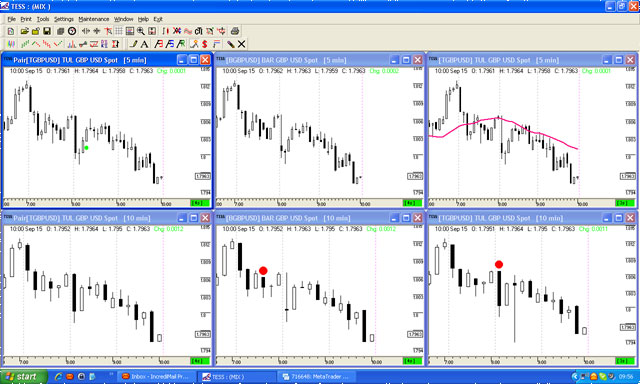