Thanks to all those that e-mailed in with the explanation for Cable:

“Foreign Exchange jargon for the UK Pound v US Dollar exchange rate. Alludes to the cable laid under the Atlantic, which linked the tickertape machines in New York and London.”

The GBP/USD was the first currency pair that could be traded 24 hours a day, due to the cable under the Atlantic.  Back in the days of ticker tapes (and Wall Street crashes, maybe) sterling and the dollar would have been the world’s two strongest currencies, making it worthwhile to lay a cable for the explicit purpose of trading the two.

Back to today and I had a losing trade this morning on the Barclays feed costing my maximum of 35 pips. It only showed on the Barclays 5 and 10 minute charts but it was a qualifying trade. 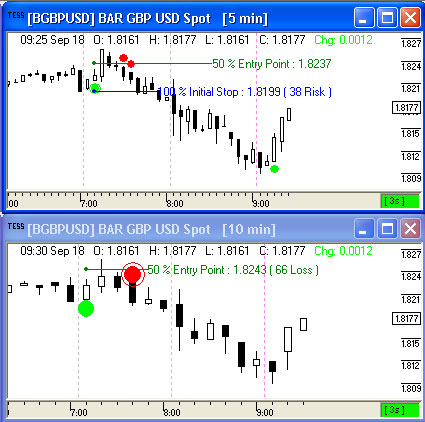 Shortly afterwards there was a potential short trade that showed up on all nine of my charts, so all feeds and all time frames, which I suppose makes it a confident trade and had I entered on the 5 minute chart I would have made 30 odd pips. But it was 22 pips away on the 10 minute chart so not a qualifying trade (and even if I had taken it I’d have only made a few pips after the spread anyway).

I will monitor how the 15 minute chart performs over the next week or so anyway.