Great morning this morning. I managed to get 130 pips on a fast moving short trade and I could possibly have got more had I not moved my stop so quickly. I seem to have moved away from the 5 bar trailing stop exit method but on trades likes these where it moves into serious profit very quickly, it seems foolish to wait to see if it’ll move even further as the chances are that you’ll give most of it back if you don’t get out, and I’ve done too much of that over the last couple of months. 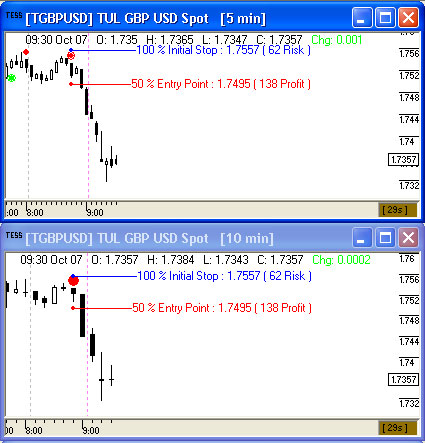 I’m not entirely sure why the dollar is so strong against the pound at the moment as I would have thought with the state of the US economy it would be moving in the opposite direction. I suspect we may see a turnaround in the trend pretty soon. There were no trades this afternoon which was a shame as the market reveresed again by around 300 pips and we did get a signal on the 5 minute charts to take this. Nevermind.