I managed to get 20 pips on Friday. The trade actually qualified early in the morning but at the time I looked, which was around 9.10, the price had retraced back to the entry level so it was exactly where I would have been had I entered at 7.15 (except that I probably would have moved my stop to take an early profit). This time I did move my stop again to lock in profit, keeping roughly 30 pips away from the current price. The trailing stop would have closed me out at 12 pips profit so I did slightly better. £2,800 profit for the week, in a very tricky week, is nothing to be sniffed at. 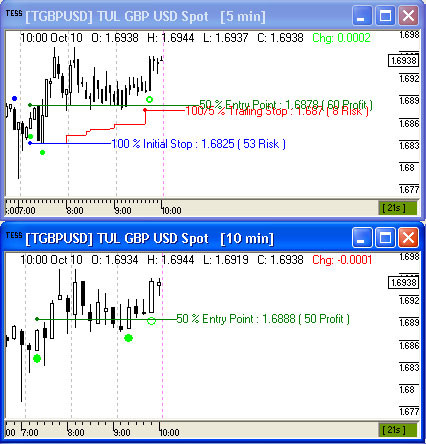 I also got an update from Tony:

Here is the update for the TUFX 1 minute pair, for week commencing Monday 6th October 08.

Number of bars to qualify in: 3

It’s been a mixed week this week with Wednesday producing substantial losses (55 pips), this could have had something to do with the turmoil in the markets on Wednesday. The week as a whole produced a loss of 25 pips.