I got a buy signal just after 10am today and managed the trade by again moving my stop to breakeven as soon as I could. The trade went around 20 pips into profit but then retraced and hit my stop. I ran the Stochastics on the 5 minute chart and, although I haven’t a clue what it all means, it showed the trade  nosediving without even reaching the 80 line. I took this to mean that I probably shouldn’t attempt to get in on the trade again whilst it’s below the official entry: 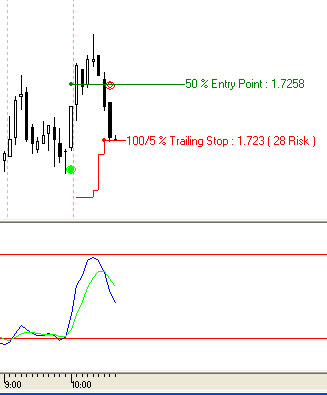 I also saved myself from a maximum loss by moving my stop to breakeven as soon as possible.

Not so on the next trade. I was silly to take this one because, despite getting the qualifying PTP signals, the entry point was right on a support line from previous lows. I took a gamble because often when the market moves through a support or resistance line, it moves fast and you can’t get in on the trade quick enough, so I opened a short trade and then watched it bounce up and down for a bit before turning the other way and stopping me out for a maximum 35 pip loss. I actually didn’t move my stop to 18 pips following the 5 bar stailing stop and I’m not sure why I didn’t. I guess I just thought that if I let it have some more room it might go back the other way again. It wasn’t to be and it cost me more than it should have: 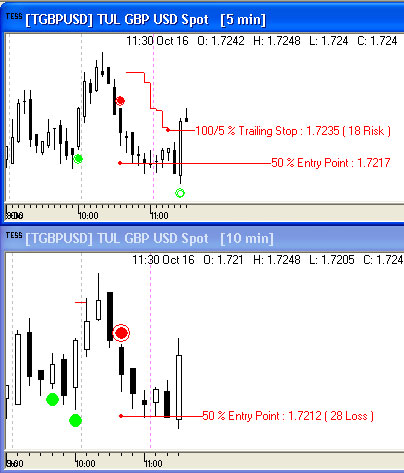 The market was pretty much moving sideways until this afternoon I got another sell signal on what looked to be a stong movement downwards. Unfortunately, I got in at the bottom and took another 35 pip hit as it retraced: 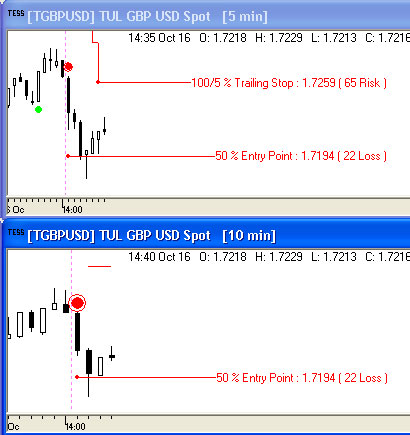 Looking back at the chart I can see my entry point was close to another support line so again, it would probably have been better to leave it. I hate days like this.