I had an e-mail from Tony this morning about the Order to Open issue I was talking about yesterday:

I also use an order to open for the same reason that you do.

I set my opening trade 0.5 pips below the TESS signal when there is a sell trade and 3.5 pips above a buy trade. In effect this gives the market an extra half pip breathing space, not a lot but this has resulted in only a couple of trades opening without the gong on TESS. The reason for the 3.5 pips on the buy is that the signal on TESS is taken from the IQ feed sell price and there is a 3 pip spread, is it possible that some of your clients have not made an allowance for this.

That is a great idea Tony and I’ll be employing that from now on. Hopefully that should knock out most of the false entries.

On to today and there was a max losing trade on the Barclays feed this morning, fortunately too early for me: 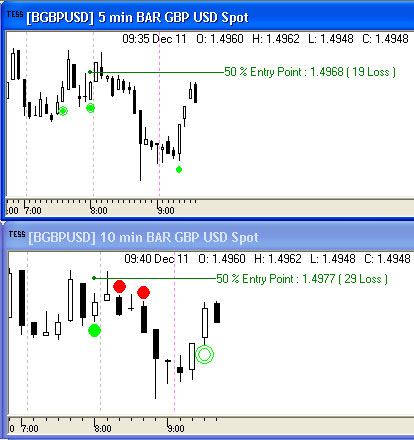 There was a break even trade around 11.30 which I took although at the time, although I had set my Order to open, I was distracted making a bacon sandwich (professional trader eh?), so I didn’t manage to move my stop to break even. I watched it go into a loss position so I let it ride rather than closing out at a loss, to see if it’ll go back into profit. Fortunately it bounced back down and I moved my stop to break even around midday and got stopped out. Could have been the most expensive bacon sandwich I’d ever had: 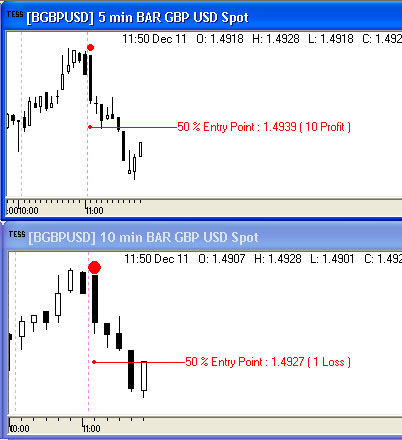 I’m not trading this afternoon as I’m off on a reccy to Leeds, back tomorrow night, but if I get a chance (and am sober enough) I’ll check through the charts early evening or in the morning to check for qualifying trades.