I had one of my quickest trades this morning on the GBPUSD. I’m still setting my Order to Open 4 pips above the Buy opening point and 1 pip below the Sell to allow for the spread in IG Index. The trade opened just after 11am and very quickly moved 20 pips into profit (in seconds). I moved my stop to break even and the trade reversed just as quickly and stopped me out. The whole thing couldn’t have taken more than 30 seconds: 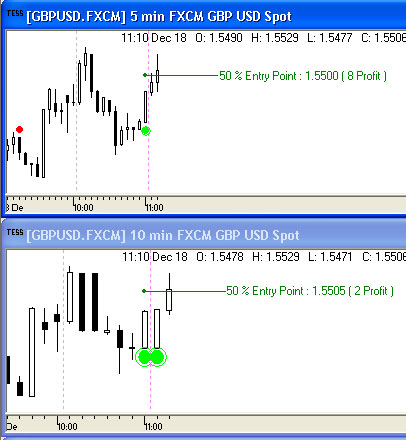 I’ve also noticed double bars happening on the 10 minute GBPUSD chart, as in the screenshot above. It doesn’t seem to affect the way it works but it’s certainly odd. It disappears if you refresh the charts though but refreshing is a bit of a pain because I’ve also noticed with the new feed it seems to take ages for the ‘Retrieving Tick Data’ to complete… minutes instead of seconds. Hopefully these are just teething troubles.

I also had about five e-mails today from users asking me to detail exactly how I manage my trades.

Basically I enter 4 pips above the TESS BUY signal and 1 pip below the SELL signal using the Order to Open. As soon as I hear the bong and the trade goes live I double click on the Stop and alter the stop level in the ticket to the entry level. I then keep my finger pretty much hovering over the button waiting for the  trade to go around 20 pips into profit at which point I hit the button and lock in a break even trade. Then I allow the trade to go out to 40 pips and move my stop to 10 pips profit and follow the market keeping roughly 30 pips behind the market, moving my stop in steps of 10 pips at a time.