I changed my initial stop to 25 pips this morning. Following feedback from readers about 10 pips being perhaps a little tight I’ve decided to compromise and test out 25 pips for a while to see how it goes. I will of course compare each trade with the original 35 pip stop.

There were a couple of trades this morning that didn’t qualify because they were just above 15 pips difference in the charts (but less than 20). One on the GBPUSD that was a break even and one on the EURUSD that would have made 10 pips.

The first qualifying trade with my method came at around 9.40 and I have to admit I wasn’t very confident as the market was bouncing sideways and this looked to me like it would continue. Still, it qualified so I went in: 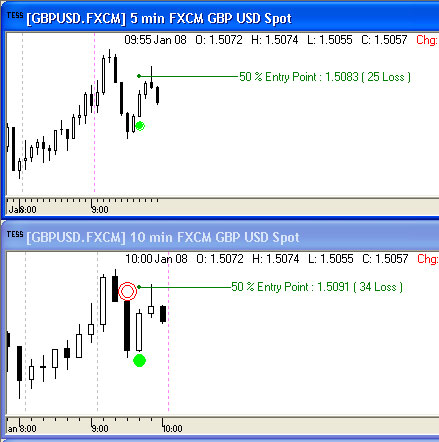 Just before 11am an interesting thing happened. I got the alert signal on the GBPUSD followed immediately by the bong giving me no time at all to set up an order to open. I got the same on the EURUSD but I did have time to set an order on that one. So I set the order then went back to the GBPUSD and opened a trade manually on that one, getting in at the right level (15070.9). Then I got the bongs on the EURUSD as it just hit the level but immediately retraced. Fortunately, my order to open didn’t get filled. I set my order to open 4 pips above the TESS entry price. Well, the market bombed so I was unsure whether to leave my order in place or not. I decided I’d had a lucky escape and cancelled the order:

Meanwhile back on the GBPUSD, on TESS it looked like the market bombed also, but in IG I was still in the trade. Perhaps it was a bad tick on TESS? It did go into a loss but nowhere near my 25 pip stop. It then moved into profit allowing me to move my stop to breakeven. It went about £250 into profit then back down to stop me out at breakeven. I finished for the morning then after a very choppy morning: 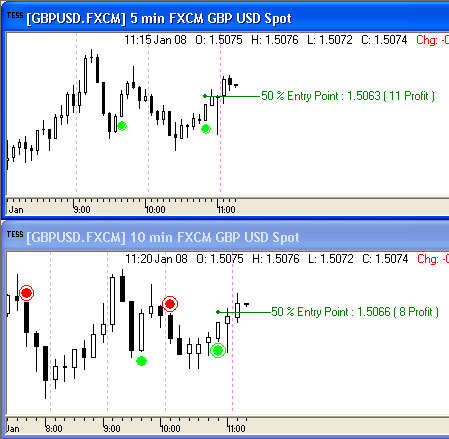 There were no qualifying trades this afternoon. I thought we might get on the rally of the pound following the interest rate cut at midday but it didn’t qualify on TESS.