For new readers to this blog I’d like to point out that since April until Christmas I’ve been using a 35 pip initial stop on all my trades. The reason I’m now using a 10 pip stop loss is because I want to see how it performs. I do realise that this will mean I will be stopped out early on some trades that retrace a bit before going on to make profits, however, it seems that most of the winning trades using my dual chart method go straight into profit without retracing much, and the losing trades tend to go way beyond 35 pips. Of course there are some that retrace 20 or 30 pips and then go on to make a profit but my hunch is that even missing out on these trades, I would make more profit but cutting losses on most of the losing trades.

One of my readers is actually now keeping a detailed log of all trades using my method and seeing what would happen using different variations of initial stop and trailing stop. Hopefully over time this will give is a better indication of which method is better. What I can say though is that using my method with a 35 pip stop has been shown to work well. We don’t have enough data to judge the 10 pip stop yet.

It also doesn’t help that the markets seem to have been a bit dodgy for the last month or so, no doubt effected by the global economic crisis, but we just have to take whats on offer and see how it goes.

I realise that scalpers are doing ok during this period, and all my break even trades have gone 15 pips into profit so it could be that this might be worth looking at too. I suppose using a 10 pip stop and trying to scalp 10 pips profit would mean as long as I have over 50% winning trades, I’d be in profit. My method produces around 70% winning trades so it’s something to consider.

There was a break even trade again on the GBPUSD around 10.20 this morning, although I missed this myself: 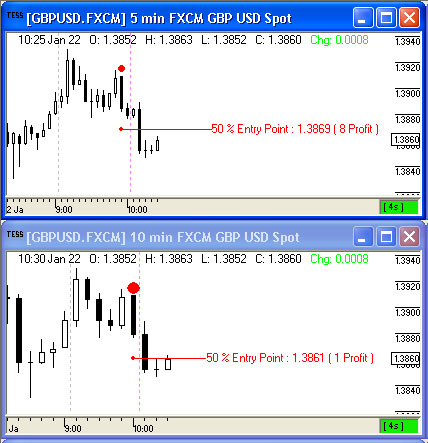 And another on the EURGBP: 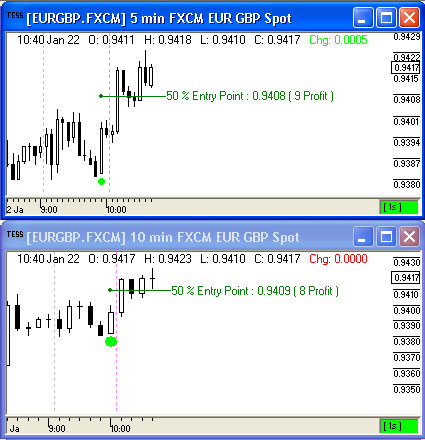 I wasn’t available to trade this afternoon but looking at the charts there was another break even trade on the GBPUSD around 2.45: 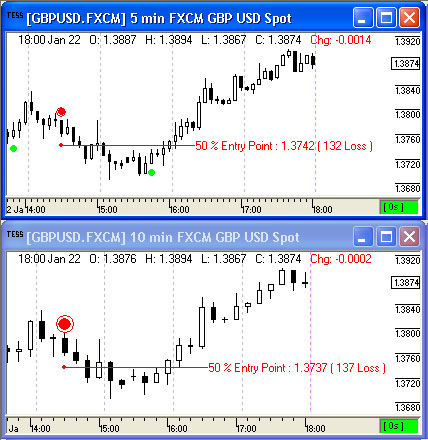