On 8th November I went along to Charlton Athletic Football Club. No, I wasn’t interested in watching a Championship game; I was there for a very different reason. I went to be shown exactly how to make a living from TRADING on Betfair by none other than Tony Hargraves.

If you haven’t heard of Tony, he’s also known as ‘The Badger’, and has built a reputation as one of the foremost Betfair traders in the U.K.

He was the sole trainer used by Betfair UK to teach their VIP clients and key accounts how to trade on sport and horse racing. He’s trained over 1000 Betfair clients and more than that number again privately, working with a London based company, running monthly training courses. More recently he conducted some seminars with Betfair Australia in Sydney, Brisbane and Melbourne.

On the workshop, Tony revealed the techniques that have taken him around the world teaching people how to make money on horse racing and sports in Australian, UK and Irish markets.

Amazingly, the cost of the training for me was remarkably cheap because I managed to get a special early bird deal.

The day was very relaxed, informal and enjoyable, and it was nice to meet other like minded individuals. The well known tipster, Bob Rothman, who has made millions from betting, was there to learn from Tony and it was also great to meet Steve Davidson who had flown in from Australia for the event. 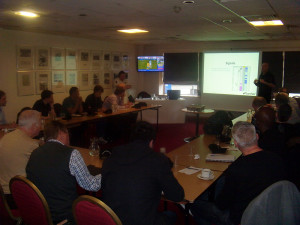 So, onto the actual training.

Tony recommends some excellent, cheap, trading software, which he uses to make the actual betting process quick and simple.

He then covers various different trading techniques including:

Scalping – How to make between £5 and £25 every race (and there is a race every ten minutes), by identifying certain signals, seeing where the resistance points are and clicking in and out of trades to scalp profits. Videos are also included which can be watched at home and are really helpful.

Swing Trading – Similar to scalping but going for more than one or two ticks at a time.

Getting it wrong – What to do if the market goes against you, taking a small loss rather than a wipe out.

Hedging – What to do after a winning trade… how to hedge so you make a profit regardless of outcome.

Laying The Field – A technique for in play betting on short sprints.

Market Manipulation – How big players manipulate the market, and how to spot the false money.

Plus detailed training on using the required software, and how exactly to set yourself up so that you can trade successfully.

This really is everything you need to know to be able to set yourself up as a full time or part time trader and actually make a decent profit from it.

Tony reckons you should be able to get nine winning trades out of ten, and since your risk reward ratio is around 2:1 you can’t fail to make a profit.

You can start with a £500 bank and build it up and it shouldn’t take too long before you are making a pretty decent wedge.

Of course, this all takes practice, and Tony reckoned that this is a skill that, once learned, will allow you to make a living from Betfair. As ever, the recommendation was to start small, practice regularly and you should be able to make a full time living using these techniques pretty quickly.

After lunch, Tony began a live trading demonstration. He traded on a live tennis match and random horse races. He even traded some ‘in-play’ races just to show what could be done, although this was more advanced and not recommended for beginners.

He profited on every single event! It was quite amazing to watch.

Since he wasn’t sat in his office, concentrating on the actual trading, instead he was chatting with us lot, answering questions and trading at the same time, it is incredible how he managed to do so well.

He made £130-£140 profit in the afternoon and didn’t lose a single trade. All whilst chatting to us.

Obviously I was very impressed.

Here is what one guy wrote about it:

“I found Tony’s seminar enlightening. The part I enjoyed most was his live demonstration of trading. He made money on all the trades!”

That was Michael from Newcastle (who is, in his own words, a Chinese Geordie!).

Well Tony is hosting another seminar in Birmingham on 25th January. As I’m sure you know betting seminars usually cost anything from £2000 up to as much as £6000 per day.

The price for Tony’s is an affordable £697 which is really low considering you will learn how to make a full time living if you wish (or part time if you prefer).

But here’s the deal.

Honestly, at that price you’d be crazy not to go.

Remember, using Tony’s techniques you can DOUBLE YOUR BANK EVERY 24 DAYS. If you want to learn how to trade on Betfair and make a significant income from home then have a serious look at the webpage below: