Bad morning for tufxp users today. There was a maximum loss on the Barclays feed on a trade opening just after 7am this morning. Too early for me fortunately but it would have cost my max of 35 pips. 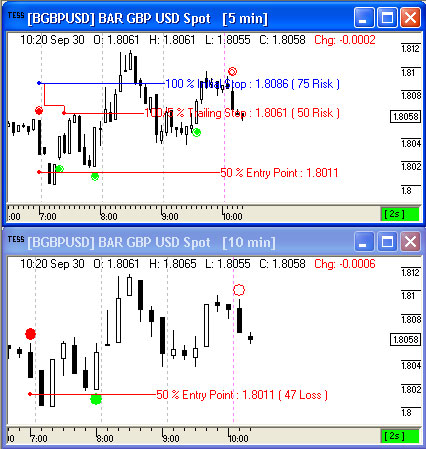 This was followed by what would have been another losing trade of 20 pips just after 8am if I followed the 5 bar trailing stop. However, as the trade had gone 40 pips into profit I moved my stop to break even to take out the risk. I did this last week and it saved me from a losing trade then. It was still disappointing to see 40 pips disappear yet again so I’m becoming more and more convinced that taking profit early rather than following the trailing stop is a better idea. Of course, everytime I say that I get a 90+ pip trade but I’m wondering whether over the longer term it would actually be more profitable to take 40+ pips here and there rather than hold out for the big trades. 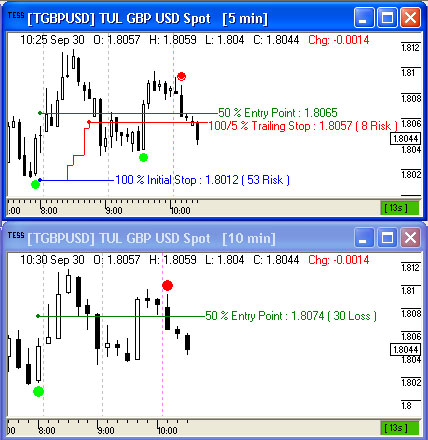 Just after 10m guess what? Yep, another 27 pip losing trade which I did go in on. In retrospect I’m wondering whether it would have been better to stay out because the market was very choppy, basically moving sideways not knowing which way it was going. The moving averages were all horizontal or going up and down like a sine wave. I guess I was thinking that it would have to break out of this at some point so I took the trade, after all thats what the software is there for, so I’m not going to beat myself up about it.

Anyway, the expression ‘rubbing salt into the wounds’ sprung to mind as I left tufxp on to monitor the market before this afternoons session. Another trade manifested around 11.30, which was outside of my personal trading windows. Naturally this went on to 50+ pips profit before hitting the stop at 9 pips profit… nice. Shame I wasn’t trading. Hopefully some of you got on it. 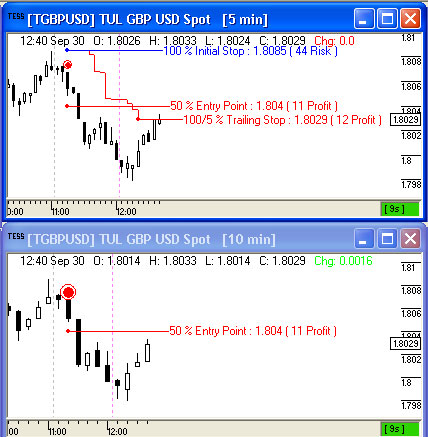 Busy day today. I entered another trade at around 2.20. I realised just after I entered that there was a news item at 2.45 so I shouldn’t strictly have got involved. Too late, but the trade moved quickly up to 53 pips profit and this time I got out. I managed to get away with 45 pips. Yes, I know this is changing the method that has worked so well for the last five months nearly but looking at the chart clearly showed the market bouncing up and down roughly between 8100 and 7990 so it made sense to take the nice profit and not risk giving it all back again.

I came away from a tricky day 18 pips up so I’m happy with that. 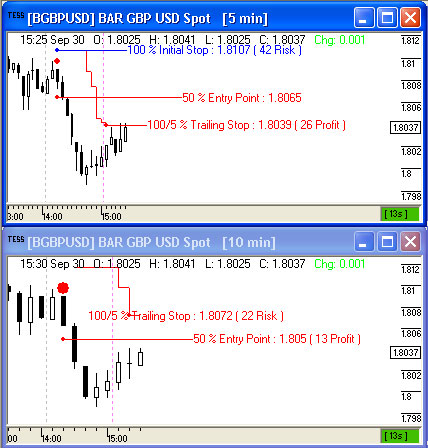